Bernadette Peters Was Never Ever Going To Woodstock

Previous Next
Bernadette Peters Was Never Ever Going To Woodstock

Into the Woods, yes. Into the real woods? Forget it, Bernadette Peters says of the Woodstock era.“Get me a nice bedroom with a bathroom,” she says. “I am not a camper!” 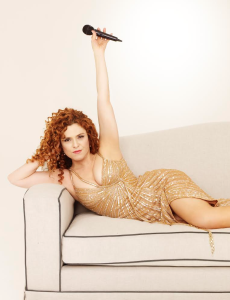 While rock icons Grace Slick and Janis Joplin were storming through the ’60s, redefining what women with big voices could do on stage, Peters was also coming of age, tap dancing in musicals such as Dames at Sea, enamored with a more innocent time.

“Oh I loved the music and I loved Janis,” Peters says of the counterculture sound now safely defined as classic rock. “But the lifestyle wasn’t for me. I grew up on the movies of the ’30s, ’40s and ’50s. I was always sort of from a different era.

“And then I had these opportunities to do what I enjoyed on Broadway, so I just continued,” she says of the jobs that kept coming her way.

Film and TV roles, more Broadway shows – such as Mack and Mabel and Sunday in the Park with George – Carnegie Hall, concerts worldwide, a major record deal and Tony awards all followed. Five decades later Peters is regarded as one of the world’s finest musical theater performers, and the premier interpreter of the work of Stephen Sondheim.

She will be this year’s top honoree at The Drama League’s annual gala on Nov. 2 in New York. She is also a co-star of the acclaimed Amazon Studios series Mozart in the Jungle, about New York’s classical music scene. And she continues with ongoing concert appearances, including a show Oct. 23 at the Aventura Arts & Cultural Center.

Speaking from her rooftop terrace on Manhattan’s Upper West Side, Peters, now 67, says she can never get enough of her Hudson River view and her dogs (she is a well-known advocate for shelter animals), and so she does not like to stay away from home too long.

“I like to go out, just do one and come home,” she says of her concerts. She does not travel lightly to these gigs, touring with lighting, sound equipment, a road manager, pianist and drummer. “I have high overhead,” she says. “But it’s a very nice-looking show.”

Taking a week or two or three off between dates is not a worry. She says she steps right back on stage, without rehearsal.

“Because it’s so in me. It’s my show that I know very well. And it’s Sondheim and Rodgers and Hammerstein and its dramatic and fun. I like going back and reminding myself of certain sentiments particularly on songs like No One Is Alone and Children Will Listen. It’s a privilege to be able to do it.”

Born in Queens, N.Y., Peters retains her New York accent off stage. She is funny and humble in conversation, asking if an approaching tropical storm was about to hit Florida and if I had storm shutters for the house.

In the early 2000s, Peters’ own Vero Beach home had been “right in the eye of the storm,” she says. “Just blown away. The skylights blew off. And it rained right inside!”

She had homes here for years with her late husband Michael Wittenberg. “We rented on the Venetian Causeway in Miami Beach, then we bought two houses in Miami. Then Vero Beach. We loved it.”

Wittenberg, an investment banker who met Peters by chance one night in New York, was just 43 when he was killed in a 2005 helicopter crash. It was a shattering end to a 10-year romance. Piecing her life back together was inevitably a challenge.

“I had a lot of concerts at the time, and so I got through the first one,” she says, “and then I had to figure out how to do the rest of them.

“But you just have to put one foot in front of the other and keep going. Work is very helpful. And good friends.”

Among those she relied on was her closest pal, Mary Tyler Moore. “I love her. I love her to death.”

The actresses met 25 years ago while starring in the ABC movie, The Last Best Year. In 1998 they founded Broadway Barks, an animal welfare and rescue organization modeled on the fundraising blueprint of Broadway Cares/Equity Fights AIDS. From this effort has also come Peters’ successful series of children’s books about her own dogs. The current one is Stella and Charlie, Friends Forever.

Last on Broadway in the 2011 revival of Sondheim’s Follies, Peters is not sure whether her next Broadway run will be a straight play or a musical. Whatever it may be she won’t “chase it,” preferring she says to let opportunities flow toward her.

“Every time I have tried to go after something,” she says, “it’s like uh-uh, no, that’s not how it works for you.”