For Ali MacGraw and Ryan O’Neal, it seems waiting 45 years to finally star in something together again was the right move after all. 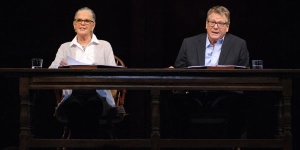 Ali McGraw and Ryan O’Neal on stage in Love Letters, working together for the first time in 45 years (Photo: Ryan O’Neal’s Twitter)

The storied screen pair, who broke hearts and box office records as young lovers Jenny and Oliver in Paramount’s classic 1970 tearjerker Love Story, are now Melissa and Andrew in a new national tour of Broadway’s Love Letters, and they’re leaving a trail of broken hearts once more.

With actors reading their “love letters” while seated at a desk, and with little rehearsal or memorization required, A.R. Gurney’s 1988 play has long attracted big stars (recently, Mia Farrow and Brian Dennehy) to its rotating casts for easy-to-stage fundraisers and limited runs.

But MacGraw, now 76, and O’Neal, 74, are not just dropping in on a celebrity lark. They appear to be taking this seriously. Their very first performance Tuesday night at The Broward Center for the Performing Arts in Fort Lauderdale, Fla., elicited gasps, tears, a standing ovation and shouts of “bravo.” The tour opens in Los Angeles Oct. 13.

While the two have retained their friendship over the years, MacGraw has not sought the spotlight much since leaving Los Angeles for Santa Fe, N.M., in 1993. But she was drawn to this material — about a pair of blue bloods who love each other deeply for decades, but never quite connect — because she loves the subject matter, and she says, she enjoys her friendship with O’Neal. 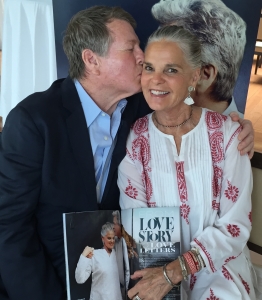 During a small press conference here on Monday, MacGraw added that having a script in front of her on stage also swayed her. “It de-stresses me knowing I don’t have to have it perfectly memorized,” she said.

Yet her performance is so adroit, so full of comic nuance and wrenching despair, it’s difficult to believe she felt any anxiety at all about this role. Under Tony-winning director Gregory Mosher’s deft hand, she does what is probably the finest work of her career.

O’Neal, who in recent years has been recurring on Fox’s long-running Bones, is also surprising in this, drawing stunned gulps from the audience as he convincingly breaks down while revealing the play’s shock ending.

With the indelible mark they made on pop culture 45 years ago and their celebrated chemistry unchanged even after all this time, it’s impossible to see them on stage without the nostalgic subtext. Yet Love Story never intrudes on this poignant evening. That the pair elevates what is essentially a bare stage-reading to these impressive heights says quite a bit about the care they have put in to it. 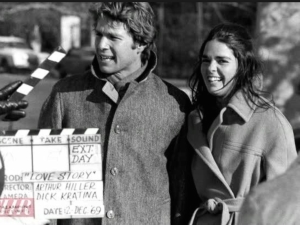 On the set of Love Story in 1970 (Photo: Paramount Pictures)

“Maybe it is an extension of the film we did years ago,” O’Neal said at the press conference. “For me it’s as if she didn’t die, and we’ve been together all this time. And you get to take a look at what happened to us.”

MacGraw, looking timeless and serene, seems to view Love Letters as a kind of full-circle life lesson. Working with O’Neal again after all these years, learning from the play’s sorrowful message, and growing as an actress, she’s content to wear her long hair in its natural silver state, and just let “life unwind.”

“Most of us have lives that include regrets,” she said. But she doesn’t dwell. “The longer you live the more you can look back on your life and say that was not smart — or that was a really good choice.”

Both performers recounted, with some surprise, the events that lead to this tour. “The producers saw our picture in The Hollywood Reporter last year,” O’Neal explained. The occasion was “THR’s 100 Favorite Films” series, during which the pair shared memories in a short video. Soon after the producers of Love Letters called.

MacGraw says their chemistry has “just always been like that.”

O’Neal, for his part, admits to a 45-year, unrequited crush on his co-star. “And she’s one of the few women who will still talk to me,” he joked, acknowledging his sometimes-troubled life off-screen.

As their first performance concluded Tuesday evening, there was a telling moment: Before they could even finish their bows and drink in all the applause, an obviously relieved MacGraw quickly disappeared in her co-star’s arms — a huddle that endured as they side-stepped offstage together.

Love Letters is playing through July 26 in South Florida, then opens in Los Angeles at the Wallis Annenberg Center for the Performing Arts in Beverly Hills on Oct. 13. Additional cities in 2016 include Boston, Dallas, Baltimore, Detroit and Hartford.