It isn’t often that so much about a movie — the story, the star, the timing — aligns as winningly as in The Social Network.

Director David Fincher’s engrossing tale of isolation and invention, was not only unleashed at just the right cultural moment, but benefits from what is probably one of the finest casting decisions in ages.

Critical acclaim is not new for the film’s star, 27-year-old Jesse Eisenberg, who is a wonder, much like the character he portrays, boy billionaire Mark Zuckerberg, co-founder of Facebook. But nothing during Eisenberg’s steadfast 10-year climb has matched the reception he is receiving now. It seems there is not an Oscar list that does not include his name.

During a recent conversation with Moving Pictures Eisenberg called the awards talk “jarring.”

“But it’s also obviously very nice to be in something people love,” he says. “This has been a very rare experience where the thing comes out and the audience reaction surpasses all the feelings we had, and hopes we had for it. This role perhaps more than any other, I felt very connected I think because it’s about a real person.”

Not just real, but a contemporary of similar style, whose life and business plans continue to demand the world’s attention.

“Yes, it’s been very strange in that sense.”

Months of worldwide promotion, as well as recently completing Columbia Pictures’ “30 Minutes Or Less,” have left Eisenberg worn but content – and on this particular day surrounded in his New York apartment by half-empty suitcases just back with him from Rome, and piles and piles of freshly-washed laundry.

“I just came back from the laundromat,” he says as if it’s perfectly natural for a movie star to not have a washer-dryer, let alone some kind of assistance.  “I guess it’s a New York thing.”

Oscar talk. Do you block it out, embrace it, what? 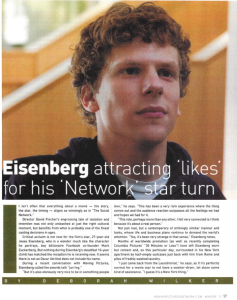 And with the script from Aaron Sorkin, were you intimidated at all at the prospect of handling so much dialogue, and having to deliver it so fast?

No. I was very familiar with Aaron’s work and the way the characters in his movies and plays and television shows speak. But primarily here it had to do with how the character’s mind works. Mark’s brain is working quicker than his mouth. So he has to speak quickly to kind of purge himself of everything that’s going on inside.

And here speaking quickly is also a defense mechanism. When he talks to Eduardo

[played by Andrew Garfield] about computer code he intentionally speaks very quickly to show him he has the upper hand.

And when he speaks so quickly in the deposition room scene it’s to show The Winklevoss Twins [Armie Hammer] that he’s more aware of the proceedings than they assume he is.

Then of course there was the practical consideration of a 165-page script fitting into a two-hour movie.

You had a short scene with Aaron in which he played an ad exec unmoved by Mark’s insolence and Eduardo’s pitch. Was that at all intimidating?

I actually found him kind of enjoyable to act with.  It was fun I guess to be in a controlled and safe environment where you can be disrespectful to your boss. You don’t get that opportunity. Ever. Without getting fired. So it had that added subversive benefit.

For a movie that is so heavy on dialogue, it was intriguing to see how much you so skillfully conveyed without words – particularly when your character and Eduardo are suing each other. It was very clear they were distraught that their friendship was ending, and that they wished it were not.

I remember when we were filming that aspect had an impact on me – and I expected it to have been more explicit in the story line. But when I saw the movie, it’s hinted at so well. It really details how Mark broke up with his best friend.

And even after they sue each other they still have a common enemy in The Winklevoss Twins – and therefore maintain some kind of bond, emotional or otherwise. Mark doesn’t dislike Eduardo — he just thinks he’s taking the company in the wrong direction – and Mark is so myopically focused on the expansion of his website that he has to do it.

Zuckerberg seems to be viewed as both villain and hero for inventing something amazing, and for — perhaps most ironically — not being a true friend. What’s your personal impression of him?

I actually feel very sympathetic toward Mark Zuckerberg. Mark does present some controversy in this area. But one of the nice things that the movie does is present a few different characters’ arguments all very fairy and unbiased.

I think it’s possible to view him critically and possibly as a bad friend. But that’s only through the lens of one of the characters and I don’t think that’s a really full picture.

In the film and during some of your publicity stops it comes across as if you have great reverence for him.

I do. Of course none of us know the real story. I’m very curious. I would love to really know.

You still have not met him yet?

Well a personal plan, but nothing real. It’s a plan out of curiosity as well as seeking some resolution.

It’s interesting to hear from an actor that you feel so personally attached – that you immersed yourself in a person’s story and it seems you just have a basic desire to shake the guy’s hand.

That’s exactly right. If for nothing else but to have some conclusion to this experience, a chapter in my life.

But I completely understand if he doesn’t want to do it.

I used him. He didn’t use me. No doubt about it. It’s a very one-sided relationship we had.

Well after some well-documented resistance he did ultimately close up shop and take a group of his employees to see the movie.In terms of meeting him, I’d guess you’re at least halfway there. And isn’t it true your cousin works for him now? How weird is that?

It could not be more odd. Yes he does work there. He worked at Google, Apple and Microsoft so he is very qualified.

But I am guessing he is not in a position to introduce anyone to Mark Zuckerberg?

Well I imagine that Mark is very busy. The people who worked on the movie – we tended to think about him and talk about him as though he was spending his days strategizing about the movie. And of course that’s not the case. He’s running a major corporation.

Did you at any time feel like wow, I’m getting kind of an MBA here while I’m doing this?

Yes, I did learn a lot.  But it also made me think about business in a self reflective way rather than academically. It’s also a cautionary tale: Don’t go into business with friends.

The movie would also seem to advise – very strongly – about knowing just when to seize a given moment if one is to succeed, and when to recognize a ship has sailed. Lots of parallels to your industry, or any I suppose.

I guess Mark in the movie does a similar thing. He creates Facebook because he needs it so much and it interests him — which is why it’s become so successful. Every successful person I’ve met it seems they are not interested in success – they’re interested in the thing that nets them that success.

I know that you have an ongoing interest in the stage, writing and directing. Will there be time for that now that so much is happening for you in film?

I did recently have to extricate myself from a play, but I will get to it. The thing about working with David Fincher is he’s so technically and stylistically superior you think you’ll never be able do what he does. Even really great directors that I know feel that way about him. There really is something almost discouraging watching him work.

You were accepted to NYU but did not attend. Did this experience and the Harvard setting re-pique your academic interests?

Well I am finishing college now. I’m about to graduate. Not from NYU but from a different college that was more accommodating — and to my financial portfolio.

You had something of an unconventional upbringing. Though your dad is a college professor, your mom was a birthday party clown? How does this affect a kid growing up – or does it?

I know a lot of actors that when they have the experience of telling their parents they’re going to be an actor or pursue a career in the very unpredictable arts, the tension is almost like when you hear about children who want to come out of the closet — and their parents reject them.

But I never had that cause my mother had an even more ridiculous career!

So they are both supportive?

They are. My parents accept what I do. My father appreciates that the arts I want to be involved in are, you know frequently of substance, whether it’s The Social Network which has great intellectual substance or a movie I did last year, Adventureland which was of great emotional substance. My father likes those movies. He’s a kind and thoughtful person.

Your family life was also interesting in that your younger sister [Hallie Kate Eisenberg] became very famous, very suddenly when she was quite young, starring in Pepsi commercials, movies, appearing frequently on The Tonight Show, just as you were starting out in acting as a teenager. You were trying to get a foothold, and here she pops up at age eight or nine and just eclipses everybody.

And that’s correct, when I was younger, about 14, I started doing plays and my sister went once with me to a little agent that I had and they asked can they send her out on auditions.

And we thought it was kinda funny – and then she got into a movie. She was a really bright kid and she liked what she was doing. It seemed very comfortable for her. But yes part of it was really strange.

Timing is everything I guess, not unlike The Social Network. Everything just seems to have come together for you – the best writer, director, cast, story — all the best people at the most perfect time.

I don’t know, but what you’re saying must be true. A lot of things did come together in the right way. When we were shooting it didn’t seem as topically interesting as it did at the time when the movie came out. I don’t know whether that had to do with the movie and the publicity the movie was generating or things that were happening with Facebook.

But it certainly seemed like better this year even than last. there’s just the kind of zeitgeist of it – because Facebook is so often in the news.

So have you treated yourself to some fabulous indulgence now that the hard work is done.

Not really. I don’t have interests that are expensive I guess.

Not even a washer and dryer?

Yes! Actually I would love one. Whenever I go to work on a movie, I get to do laundry every few days – it’s so exciting! Yes, I would love to have that.

You seem just sort of like Everyman – sitting there surrounded by clothing,  putting your life back together before going on the next adventure.

Well if Everyman is doing laundry today tell him to throw mine in.