At least that’s the word from one of the songwriters of “She Bangs,” the first single from Martin’s just-released Sound Loaded.

“She bangs! It’s a metaphor for the universe,” says veteran hitmaker Desmond Child, who’s penned smash singles for Aerosmith, Bon Jovi, Cher, KISS, Chynna Phillips, Joan Jett, and Michael Bolton — but is lately best known for co-writing “Livin’ La Vida Loca” and “The Cup of Life” for Martin. “You know the big bang theory? So the universe is really this ‘mother universe’ — she bangs, and explodes,” Child says. “She moves. The planets, the galaxies, are all moving. That’s what it means.”

In his splendid waterfront living room, Child is smiling and waving his arms as he tries to explain the indelicately titled song and how he might respond when parents ask, “She what?”

He’s laughing now — most amused by all this — but is definitely all business when it comes to explaining what it takes to put together a great hit song.

He and his “La Vida” writing partner Robi Rosa, along with Walter Afanasieff, Mark Taylor, and other chart-topping composers appear to have worked their magic again for Martin’s latest record. Yet they’ve done so in a way that moves the Latin heartthrob forward, while retaining the sizzle that made his self-titled English-language crossover set such an enormous success last year.

“You know when we wrote ‘La Vida Loca,’ Robi and I very specifically said we we’re going to write the Millenium Party Song From Hell. We wouldn’t allow any choice to be in the song that wouldn’t correspond with that feeling. So we would say, ‘Does this kick-drum sound like the Millenium Party Song From Hell? Would it have that in it? No? No. Then let’s keep searching.’

“It was just one of those instances where the song and the guy who sang it were one. Ricky, at the turn of the century, represents this kind of hopeful reckless future we all want to live.”

As with “La Vida Loca,” “She Bangs” is also a slick blend of Latin surfer-pop. Child, 47, a Miami kid whose Cuban mother was also a composer, was among the first mainstream writers to fuse rock with the Latin influences of his hometown and his own heritage.

He’s also had a sporadic career as a solo performer in his own right, scoring in 1991 with “Love on a Rooftop” and in ’79 with “Our Love Is Insane” as frontman for his mid-to-late-’70s group, Desmond Child and Rouge. 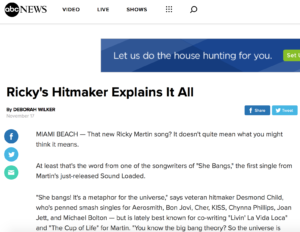 But it has been as a songwriter (47 Top 40 hits to date), producer, arranger, and now publisher that Child has become an industry force.

In fact, it is his rapidly expanding publishing empire, Deston Songs that unleashed the ubiquitous stadium hit “Who Let the Dogs Out,” while also resurrecting the longtime Bahamian group the Baha Men.

“75,000 people barking at Yankee Stadium, and they’re all sending me money,” he quips.

Child makes no bones about the song’s “Macarena”-like status or the fact that the Baha Men might just as quickly fade back to little more than island favorites.

“Who cares? It’s great now. Let’s live in the moment. Let’s bask in the glory.”

As for his own success, he says — beyond pumping out great hits — he’d like to bring back “the art” of song publishing. His Deston offices in Nashville, Tenn.; Los Angeles, New York, and Miami Beach, are set up with writing in mind. In Nashville for example, writers can lock themselves away inside vintage Airstream trailers for as long as it takes for the right mood to strike.

“It’s a nurturing environment for the songwriter, where we help writers get focused and then get those songs placed on the right records,” he said of the company. “Big-time publishing has become nothing but a banking and real estate enterprise where they do not have the time to cultivate individual writers and songs.”

He’d also like to “restore the honor” in hitting No. 1 on the Top 40. Today, with many record labels “obsessed with having No. 1 albums,” the promotion of singles often takes a backseat. But to someone who writes singles for a living that can be dangerous. “Chart position really does grant someone a key to the city.”