When actor, activist, radio announcer and Internet sage George Takei is honored next week by the National Gay and Lesbian Task Force, he plans to ascend the stage with grace, speak eloquently and shake the hand of every last well-wisher.

At no time is there likely to be even a hint that the globetrotting 76-year-old (forever Sulu from Star Trek) is perhaps weary or in need of a break.

Consider though that in the last four weeks alone, Takei’s schedule has taken him from his home in Los Angeles to Montreal for a Star Trek Convention; then to Washington, D.C. for a speech at the National Press Club; over to Winnipeg, Cincinnati and Oklahoma City for narration work with philharmonic orchestras; back to the east coast to record promos for his Broadway musical Allegiance; up to Boston for a speech at Northeastern University; back to L.A. for a meeting at Paramount; then finally on to Dallas for the premiere of Free Birds, in which he costars with Amy Poehler and Owen Wilson. 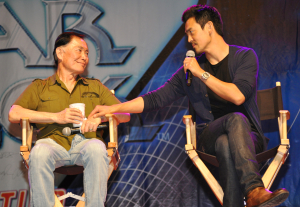 Sulu, meet Sulu: George Takei and actor John Cho talk with each other and fans of all ages at a Star Trek convention in Las Vegas.

“I’m having the time of my life and to be able to do everything on this scale is an absolute delight,” says Takei, who stays energized with power walks and lean eating.

“Everything” also includes a YouTube show, Takei’s Take, during which he demystifies (hilariously) gadgets like Google Glass and tech topics such as online dating and cord cutting. He also continues to put his signature voice and personae to work as “The Announcer” on The Howard Stern Show and for brands such as Old Navy, Nickelodeon and Sharp electronics.

The punishing schedule does not faze him. “It’s a lot of fun,” he says.

With 9 million Facebook fans, 1.8 million Twitter followers, and a Klout score of 90, George Takei is a world influencer.

While it’s tempting to credit his later-in-life surge to his social savvy, Takei’s popularity had been on-the-rise again long before the social media boom of 2008. One of more than 100,000 people of Japanese heritage imprisoned in U.S. detention camps during the 1940s, Takei had long been well known for his civil rights activism and passionate campus talks about his family’s internment.

But it was his confirmation in 2005 that he was gay — and the speaking tour that followed — that brought him new, young audiences as never before.

Takei says credit for all this goes to former California Gov. Arnold Schwarzenegger, who campaigned on an equality platform, boasted of his “gay friends,” but then vetoed the state’s same-sex marriage bill in 2005.

“That got my blood boiling,” Takei says, still angered by Schwarzenegger’s betrayal. “I said I have to speak out on this. And my voice needs to be authentic.”

Talking by phone from his home in California, Takei said coming out at age 68, after a lifetime of constraints, was complex.

“First you come out to good friends, then family, and then the circle widens. I had never spoken to the press, because I wanted to be able to work.”

As Takei’s gay rights activism took hold, it was longtime partner and now husband Brad Altman who encouraged him to accept Howard Stern’s offer to appear on his radio show.

“Here I was advocating for the LGBT community – but essentially I was preaching to the choir. We maintain that the majority of people are decent and fair-minded, but they’re busy making a living. They can’t stop to think about issues that don’t affect them.

“So first we have to reach them,” he said of how he ultimately decided to join Stern’s cast of regulars. “Our Democracy is dependent on good people being actively engaged. This is why I am also so vocal on the unjust internment of Japanese Americans. I’m always surprised by the number of people, many who seem otherwise well informed, who say ‘I had no idea something like this ever happened in the U.S.’ We must teach our history.”

No matter his raised profile and career highs of recent years, Takei says he remains forever indebted to Star Trek.

“Would you believe it’s been 47 years, 14 movies, four TV series? There are conventions galore all over the world. We could attend one every weekend.”

While he occasionally tires of those long-running spats with former co-star William Shatner (“Bill is Bill”), Takei never tires of meeting the show’s admirers.

“Gene Roddenberry created it, but the phenomenon was created by fans. It’s important to go there in person and say thank you.”