Al Pacino “One Night Only” (moderated by Deb Wilker)

Previous Next
Al Pacino “One Night Only” (moderated by Deb Wilker) 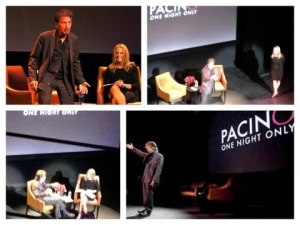 Al Pacino has done brisk business in recent years with his One Night Only tours —candid evenings in the style of Inside The Actor’s Studio during which he discusses his celebrated career, favorite roles, co-stars, directors, highs, lows, motivations and such. The performance I was to moderate would be the first of two he was doing at Hard Rock Live in SoFla.

My understanding is that Pacino dislikes hearing the same questions again and again, thus preferring new hosts most nights — sometimes selected on-the-fly from a pool of theater professors and arts reporters as he makes his way around the world.

Unbeknownst to me, a colleague threw my hat in a ring. Pacino asked to see some of my TV and print work, and a coupla days later his producer called to say I was hired.

Pacino’s career is, of course, a massive one to memorize, let alone on short notice. To be ready for any possible reference from more than 50 films over five decades, in addition to his theater work seemed daunting.

I expected his people to have lots of rules, and at least a few specific questions he wanted asked of him. But when his producer called back to go over the details, she explained that Pacino had almost no ground rules at all. He wanted me to create all the questions – which he very deliberately did not want to see in advance.

He is wedded to the element of surprise in these shows.

Other than one recent film he’d prefer I’d ignore, she said nothing was off limits, even his personal life. Refreshing in this age of managed everything.

She asked me to prepare a discussion with him that would run about 70 minutes or so. I’d also have to toss to film clips and assist him later with an audience Q & A. He would finish the evening by performing a scene from one of his favorite plays.

The next day, about three hours before showtime she walked me through a brief sound and lighting check. While we were marking out where we’d be on stage and where I needed to look to receive her cues, Pacino popped in and asked her, “How we doin’?” — wondering I guess if they had hired a dud moderator, or maybe gotten lucky. 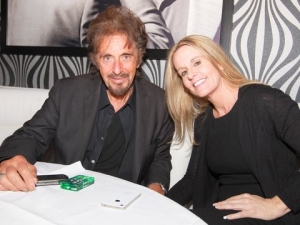 Hanging with Al Pacino after the show — just holding hands under the table, nbd

He then turned to me, arms outstretched, and said, ‘I hear we’re batting a thousand!” We shook hands and took our places so the lighting director could do his thing.

Pacino has a sweet, nutty-professor vibe. He was easy to work with, fun and funny. He knows he’s one of the greats but presents himself with humor and humility.

It seemed he could talk about the craft of acting – his own and everyone’s — till the end of time. During the show he had to be steered back on track a few times, his passion getting the better of him. Don’t ask me what the particular stories were that he became so engrossed in. The whole thing zoomed by in a blur.

Alas, there is no video or print interview to go with this little blog entry. It was, as they say, One Night Only. I’m told Pacino does photograph these performances, and keeps the videos only for himself.

After the show we met backstage, where he thanked me and introduced me to his girlfriend. Later there was an after-party for the casino’s high-rollers, during which Pacino invited me over to his table for a photo.

“Well, did you like that?” he asked of our one night only together. It was only then just sinking in that I had spent an actual evening on an actual stage with actual Al Pacino. “What did you think?” he asked again.

What did I think? What did HE think is all I wanted to know. But he never did give me the slightest clue as to whether I met his interviewing expectations; was a dud; or something in between.