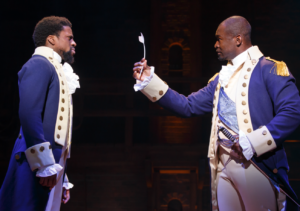 LOS ANGELES — In the two years since Hamilton debuted on Broadway, the game-changing musical about the founding fathers hasn’t just become a pop-culture behemoth. It has transformed history lessons in schools and the way tickets are sold to live events. It has overhauled our notions of what Broadway musicals can be and who should star in them. It forced New York’s theatrical community into a full-on embrace of social media, revolutionizing the way Broadway connects with fans. And it has made and remade careers, most notably that of its prodigiously talented creator, Tony-Emmy-Grammy winner Lin-Manuel Miranda.

Now, as the show’s first national tour settles in for a four-month run at the Pantages Theatre in Los Angeles, Hamilton has also transformed a city — closing down streets, vacuuming up media attention and turning hardened L.A. dealmakers into fawning, raving fans.

Just what is it about Hamilton that has made this jaded town bow down? The merits of the show are well established. In the late-1700s, scrappy immigrants rebel, rise up and rap to Miranda’s modern-day sung-through score — a mashup of jazz, blues, rap, traditional pop and musical theater. The diverse casting was inventive too, featuring actors of color portraying the white historical figures we knew mostly from textbooks.

After bowing on Broadway as an enlightening primer during the last of the Obama years, Hamilton plays on a different level in the Trump era, almost as a call to arms — and as a reminder: The United States was designed to survive, even amid the most poisonous leadership.

By early next year there will be five Hamiltons running simultaneously, once a London production is added in November and a second national tour debuts in Seattle in February. These companies are in addition to an open-ended sit-down production that’s been running in Chicago since last year; the first national tour that debuted in March in San Francisco en route to L.A. — and the indefatigable mothership on Broadway at the Richard Rodgers Theatre.

At issue is — can all this greatness be properly sustained?

Given the show’s record 16 Tony nominations, 11 wins, the mountain of hype that surrounds it, record box-office grosses and the cost of tickets, expectations will continue to be off the charts. All of which makes cloning Hamilton a delicate process. There is no room for an almost-as-good road version of Aaron Burr. These guys have to crush it — and then some. It’s a pleasure to report that they do. The production that opened Wednesday night at the Pantages fires like a brand new show — crisp and exciting and full of breakout performances.

Emmy Raver-Lampman, an original Broadway ensemble member, is a knockout as Angelica Schuyler, the role originated by Renee Elise Goldsberry. Isaiah Johnson as George Washington earned an ovation so rousing at the soaring conclusion of “One Last Time” that it took a moment for the show to resume. 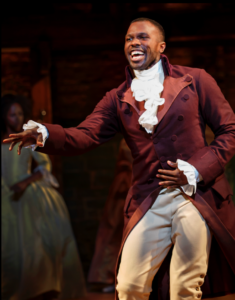 And Joshua Henry as Burr (in both the Chicago company and now on this tour) is an eye-catching presence in his every scene. But his finest moment comes during the show’s sexiest number — “The Room Where it Happens” — as he reshapes the tune’s speakeasy vibe. He too earned a sustained ovation that threatened to bring things to a halt.

In the title role, Michael Luwoye is a superb Alexander Hamilton, bookish and stoic and particularly perfect in the cabinet rap battles with Thomas Jefferson (Jordan Donica). And Solea Pfeiffer’s winsome turn as his spouse Eliza provides the gentle counterpoint in this male-driven epic.

Comic respite comes in the form of King George (a terrific Rory O’Malley, returning to a role he played on Broadway), whose passive aggression is not obscured by the bouncy pop tune he reprises throughout the show.

Wednesday’s opening-night audience was a show within the show — a potent mix of celebrities, media, agents, family, veteran Pantages subscribers, just plain fans — and Miranda himself, sitting tenth row-center with his parents, reveling in an unusually cool Hollywood moment. All around him fans welcomed their favorite lines (“I am not throwing away my shot;” “Immigrants, we get the job done”) and tunes with the kind of instant screams usually heard when pop titans hit the first telling notes of their biggest songs.

That poses another unique challenge for this cast and all who will follow. These actors aren’t just competing with the recent star-making performances from Leslie Odom Jr., Daveed Diggs and others in the original Broadway cast. They’re also facing off with the stand-alone success of the triple-platinum cast album, which has been on Billboard’s Top 200 albums chart for 98 weeks. Songs such as “My Shot,” “The Story of Tonight,” “Helpless” and “Washington on Your Side” seeping into pop culture are testament to Miranda’s sleek melody writing, ear for real-life dialogue and the performers’ supple vocals. In this cast, that recording has met its match. 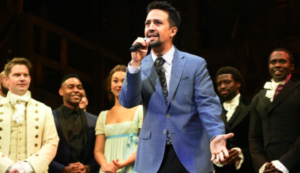 Lin-Manuel Miranda at The Pantages Theatre

Just after the final bows, ensemble members graciously brought out the swings and understudies, performers who must learn every role and be great on a moment’s notice. That set the stage to introduce the creative team — among them director Thomas Kail, choreographer Blankenbuehler, musical director Alex Lacamoire, author (of the 2004 Hamilton biography) Ron Chernow and then Miranda — all of whom left no doubt they’re determined to keep new incarnations of Hamilton crackling.

“I’m a mess,” Miranda said as he took a bow to deafening cheers. “Thank you for welcoming this company with such open arms. I have nothing smart to say. My heart is so full.”