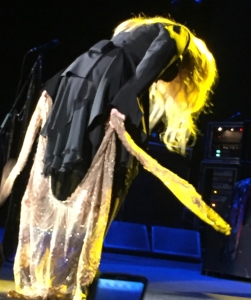 In this 2005 review of the Stevie Nicks Don Henley Two Voices tour for The Hollywood Reporter, I wrote that the then 57-year-old Nicks “only gets better with age.”

Would we have predicted that at 67 this rock legend would be even more devoted to her career? That she’d still be seducing fans with “Gold Dust Woman” nearly 40 years after its release?

As much as I adore current-Stevie and was awed by Fleetwood Mac’s ‘Rumours-five’ On With The Show tour, (in fact I was awed by both Nicks and Christine McVie, 72  — both have set new benchmarks for women in rock) — Nicks’ 2005 mini-tour with old flame Don was also one of the finest evenings of classic rock ever to come along. How could it not be, considering the manner in which these superstars dug into each others’ work, a most satisfying interplay between two rock bands in absentia.

Just for fun, I’ve included a coupla Two Voices YouTube clips below, in addition to my original review. Check out audience reax at 1:27, 1:55, 2:18 in the Hotel California clip, when Nicks makes her initial appearance onstage, strolling in while Henley was already underway with the song, making it clear she was gonna crush this Eagles classic.

Bottom line: Dream bills don’t get much better than this magical pairing, which deserves a longer run

HOLMDEL, N.J. (Hollywood Reporter) – Big-ticket heritage acts have been propping up the listing concert business for years now, and if this is the way it must be, the industry would do well to take a close look at a novel (but too-brief) new tour from Stevie Nicks and Don Henley — one of the most magical rock shows in a long while. 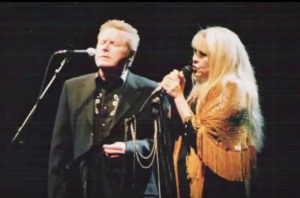 More than just the standard double bill, these songwriting legends (and fronts for two of the greatest bands of all time, Fleetwood Mac and the Eagles) work hand in hand, interpreting each other’s stuff in a way rarely done by truly big stars.

On the second night of this 10-date swing, Henley, up first, got things rolling with some dry wit and a well-received “Witchy Woman.” Quickly he was into the big stuff — “Hotel California” — during which Nicks sauntered in from the wings to join him, setting off the kind of frenzied, organic ovation that touring’s modern-day corporate labs simply cannot manufacture.

Superstar pairings are best, of course, when there is mutual admiration between the artists and a career path that is somehow parallel yet also different — as with Billy Joel and Elton John. Tortured friendships are also great for the boxoffice (Eric Clapton and George Harrison) — and if the two were also lovers back in the day, well, that’s a grand slam.

Henley and Nicks — both pioneering California rockers — were indeed an item in the late 1970s (after her split from FM bandmate Lindsey Buckingham) and have remained friendly. While they don’t quite set off the unrequited sparks that the Nicks/Buckingham-led Mac still produces to this day, there is a familiarity about them that lends both comfort and renewal to hits such as “The Last Worthless Evening” (his) and “Gold Dust Woman” (hers).

On this particular night, there was also a defiant “Stop Dragging My Heart Around,” a wistful “New York Minute” and their lone hit together, 1981’s “Leather and Lace.”

Each also worked hard separately. From his seemingly inexhaustible supply of frothy radio singles and sturdy album tracks, Henley pulled out “Dirty Laundry,” “Life in the Fast Lane” and the brilliant “Heart of the Matter.” Nicks, who only gets better with age, countered with an ethereal “Rhiannon,” and dramatic versions of “Stand Back,” “Edge of Seventeen” and others from her long career, all set off by her signature ribbons and shawls.

Though this terrific evening ran almost three hours, there was still a lot missing, including the rumored set-closer “Desperado” — something they’re bound to get to if this limited run becomes the full-fledged tour promoters are said to be banking on for next year.