BILLBOARD | May 16, 2016
BY DEBORAH WILKER
Read this story in Billboard
Upfront week in New York — when TV networks and cable outlets woo media buyers for the nearly $9 billion in advertising dollars up for grabs in the coming season with a barrage of sizzle reels, sales pitches, skits, clips, and cocktails aimed at making new programming and returning shows go down easy.

But in recent years the networks have been relying more on music — and music stars — to help make their pitches. By rolling out Mariah Carey, Jennifer Lopez, Nicki Minaj, Bollywood superstar Priyanka Chopra (star of ABC’s Quantico) and the singing casts of Broadway’s Hamilton and Fox’s Empire, the networks are looking to “connect culturally,” according to Josh Rabinowitz, senior vp/director of music for ad agency Grey Group. “With all the competition outside the traditional networks, it’s important for them to show they’re in tune.”

* Decked out in a tiny sparkling bodysuit laced with dozens of peekaboo cut-outs, Carey, 46, played her image to the hilt while introducing her new E! docu-series, Mariah’s World, during NBC Universal’s presentation: She was carried to the Radio City Music Hall stage by bare-chested hunks while lying atop a plush purple chaise. “It was symbolic of what the show is about: voyeurism and extravagant behavior,” said Mediahub svp Carrie Drinkwater. “It was perfect: a train-wreck you want to watch.”

* ESPN’s presentation focused on the uniqueness of live-TV viewing and illustrated its point with original music from Hamilton’s Leslie Odom Jr. and Daveed Diggs. (Artists who do not have network contracts usually are paid for such appearances.) “Many of us have not been fortunate enough to see Hamilton, so even to get a glimpse was phenomenal,” Drinkwater says. “It was very appropriate because it lent itself contextually to what ESPN’s presentation was about: rising above.”

* NBC has a formidable musical force in Lopez, recently a part of both the Fox family (as an American Idol judge) and NBC as star of the ongoing police drama Shades of Blue. NBC and Telemundo pressed Lopez into service for a bit of one-upmanship, programming her buzzed-about private concert at Hammerstein Ballroom against Fox’s party at Wollman Rink in Central Park on May 16. “It was typical network fodder, trying to steal a little thunder from Fox,” says Mediahub vp Kaitlyn Soro. “J-Lo sang for 50 minutes, did three outfit changes — she was spectacular.”

* Fox’s Upfront at the Beacon Theatre showcased Star, the next music drama from Empire creator Lee Daniels, starring Queen Latifah — “It’s about three young women and they performed; it has that millennial music vibe,” Drinkwater says — and featured a performance from Empire’s cast, which was joined by musical contributor Ne-Yo.

* While Jimmy Kimmel was the wise-cracking ringmaster at ABC’s presentation, the network appears to be positioning Quantico’s Chopra as a top new star. She appeared first in a taped bit spoofing the network’s shows, then emerged — dancing down the aisle of Lincoln Center’s David Geffen Hall — for a musical number incorporating Mark Ronson and Bruno Mars‘ “Uptown Funk,” Prince‘s “Kiss” and Fifth Harmony‘s “Worth It,” with the adapted lyrics: “ABC — we’re worth it.”

And while having a live wire like Minaj perform at Adult Swim’s upfront Wednesday night might seem risky — she actually gave an audience member $500! — Soro says, “Given the young buyers who are the future of this business and Adult Swim’s millennial audience, Nicki’s on target.”

A version of this article was originally published in the May 28 issue of Billboard: 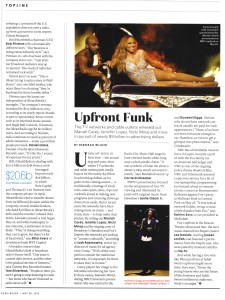 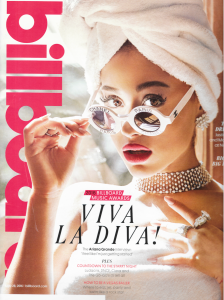